By 1933 Walt Disney had gained prominence in Hollywood as the premiere producer of cartoon films. Mickey Mouse was phenomenally popular, (the 1930s Mickey Mouse theater clubs boasted more members than the boy and girl scouts combined), the Silly Symphonies were successful in their own right, (Three Little Pigs, released in the spring of 1933 won the 1934 Academy Award for Best Short Subject: Cartoon), and Walt himself was the owner of two Motion Picture Arts and Sciences statuettes.

As his stature amongst fellow Hollywood artists increased, so too did the number of invites to special events. On September 28, 1933, Walt Disney was invited to be the guest at a special dinner organized by the Writer's Club.

The Writer's Club was a social organization, which I think was formed in 1920 by members of the Author's League. I haven't been able to locate much about the Writer's Club. If anyone can provide some more info on how often or where the members met, what the Club's purpose was, etc., I'd be happy to add the details to this post. 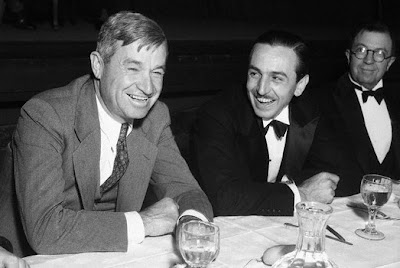 Will Rogers and Walt Disney share a laugh at the Writer's Club dinner honoring the cartoon producer. The evening's toastmaster, Rupert Hughes, is seated on Disney's left, (right side of the photo).

Regardless, Walt attended the dinner held in his honor, as did many other Hollywood notables. The image in this post shows the cartoon producer sharing a humorous moment with his friend, the immensely popular actor, comedian, and social commentator Will Rogers. Disney and Rogers had become friends through their mutual interest in polo - Disney often practiced his game at Rogers' Santa Monica ranch, and Walt was set to include a caricature of the famed horseman in the Mickey Mouse short, Mickey's Polo Team, but pulled the sequence following Rogers' death in a plane crash in 1935. 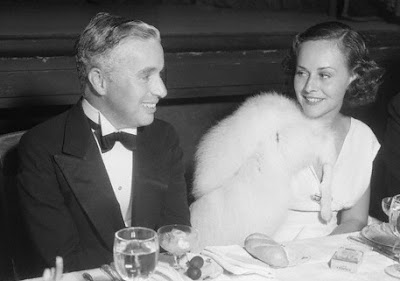 Charles Chaplin and actress Paulette Goddard were also seated at the head table.

Also in attendance at the dinner was Walt's boyhood idol, Charlie Chaplin. While he was living in Kansas City, Disney had often parodied Chaplin, even going so far as to enter Chaplin impersonation contests. The famed actor attended the dinner with actress Paulette Goddard, who lived with Chaplin in his Beverly Hills home. During their time together Chaplin and Goddard refused to comment on their marital status, which in turn provided subject matter for Hollywood's gossip columnists.

The October 7, 1933 San Mateo Times carried a short story about the dinner:


Behind the Scenes in Hollywood


"The season's most embarrassed guest of honor was Walt Disney, creator of Mickey Mouse, at the dinner given him by the Writer's Club. All the big-wigs were there...

Speaker Joe Schenck twitted Disney: 'Walt used to make twenty-six pictures a year, then he joined United Artists, and the influence got him. He's taken up polo and now he's only going to make eighten pictures. Next year he'll probably do only eight.' "

The October 15, 1933 edition of the Lincoln Star also carried a report about the dinner, but this one had a more personal touch as the story was written by none other than Will Rogers:


"We were all down to a mighty fine dinner they gave to Walter Disney. He is the sire and dam of that gift to the world, 'Mickey Mouse.' Now if there wasn't two geniuses at one table, Disney and Charley.

One took a derby hat and a pair of big shoes, and captured the laughs of the world, the other one took a lead pencil and a mouse and he has the whole world crawling in a rat hole, if necessary, just to see the antics of these rodents. But there was more than just shoes and pencils and derby hats and drawing boards there. Both had a God given gift of human nature, These professors base it all on psychology of some kind and breed, but it's something human inside these two ducks that even psychology hasn't a name for. Why that Three Little Pigs, why I would have given my life just to have played one of them. That's the best picture ever made.

That night at the dinner the Writer's Club gave...outside of a non stop speech of mine it was a wonderful dinner. Chaplin wouldn't talk, but he did two fo the cleverest pantomime sketches I ever saw. Then Disney wouldn't talk much. Everybody that does things I have noiced they don't talk at public gatherings but boy us other old windbags, we just gas up and go till the lights are turned off. Rupert Hughes, that clever writer, is a wonderful toastmaster."
Posted by David at 7:25 AM