November 1932 was the hottest on record in Los Angeles. A cold snap would follow in December, but that month, those living in the Los Angeles area endured daily temperatures in the mid-80s.

On Friday, November 18, 1932, Walter Elias Disney and his wife Lillian traveled from their home on Lyric Avenue, down to the Ambassador Hotel on Wilshire Boulevard. The four mile journey would normally take about 15 minutes, but on this day, the traffic would be much heavier.

Four years to the day of the release of the first Mickey Mouse sound cartoon, Steamboat Willie, Walt and Lillian were on there way to the 5th annual Motion Picture Arts and Sciences' banquet, being held in the Fiesta Room of the Ambassador Hotel. 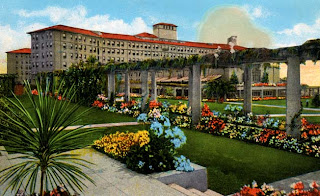 The Ambassador Hotel as shown on an early postcard.
In addition to hosting several Academy Award ceremonies, the Hollywood landmark was also home to the famous Cocoanut Grove nightclub. The hotel was demolished recently to make way for a public school.

In front of hundreds of film notables, including movie stars, directors, studio executives and state and city politicians, Walt Disney would collect the first two of his many Academy Awards. One newspaper article stated, "It was a glittering ceremonial, attended by more than 900 of the great and lesser-great of the film world." 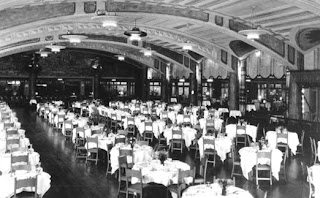 According to another newspaper report, "The event drew thousands of spectators who blocked traffic for more than a block in front of the hotel. The crowds parted as sleek limousines drew up and discharged the feminine stars, many of them with great puffed sleeves, high neckline and fur-trimmed gowns, and accompanied by the immaculately groomed escorts." 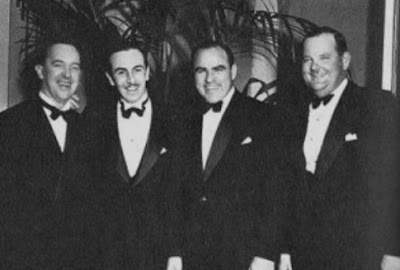 Walt Disney socialized that evening with several of his Hollywood friends. As testimony to Disney's acceptance in Hollywood social circles, one year later he would attend a party given by fellow producer Hal Roach. Held in a sound stage at the Roach Studio, the gathering of Hollywood's who's who celebrated Roach's 20 years as a filmmaker. Besides Walt Disney, those in attendance included Laurel and Hardy, the Marx Brothers, Harold Lloyd, John Weissmuller, Jean Harlow, Darryl Zanuck, Jesse Lasky, Louis B. Mayer, Will Rogers and Sid Grauman.

The ceremony in the Fiesta Room was hosted by Conrad Nagel, President of the Academy of Motion Picture Arts and Sciences, an organization he and 35 other like-minded industry insiders founded in May 1927. 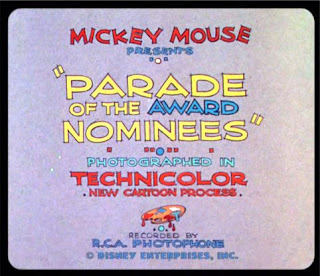 At some point in the banquet, a short color cartoon produced at the Disney Studio was played for those in attendance. Parade of the Award Nominees featured caricatures of those nominated in the Best Actor and Best Actress categories.

Several internet sites indicate artist Joe Grant was hired specifically to work on this short, however no production records for this film exist at the Disney Archives to confirm this. Some historians suggest Grant's first work at the Studio was on the film Mickey's Gala Premiere. 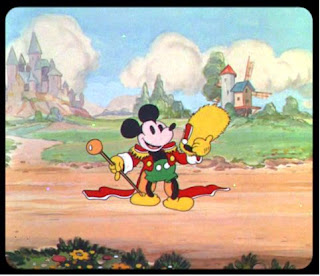 Parade of the Award Nominees is notable for the fact the film marks Mickey's first on screen appearance in color, preceding the color Mickey Mouse short The Band Concert by several years. As Mickey Mouse led the procession the actors and actresses walked down a carpet dressed as the characters they portrayed. 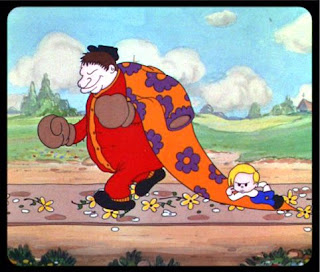 Wallace Beery, (with child actor Jackie Cooper in tow holding on to Beery's coattails), was nominated for his portrayal of an alcoholic boxer trying to get his life back in order on account of his son in The Champ. 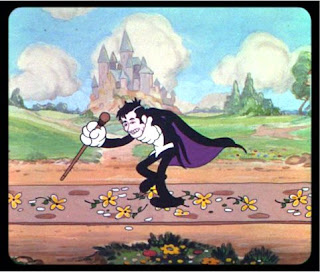 Fredric March was nominated for his dual screen appearances as Dr. Jekyll, 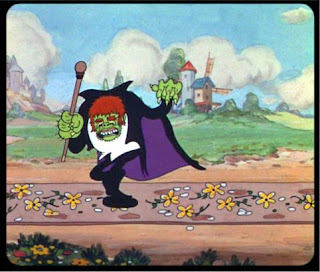 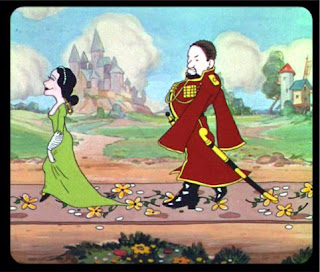 Alfred Lunt and Lynn Fontanne were nominated for their screen performances in The Guardsman. Convinced his wife (Fontanne), was cheating, Lunt impersonated a Russian guard in order to seduce her. He succeeded but she claimed she knew it was him all along. 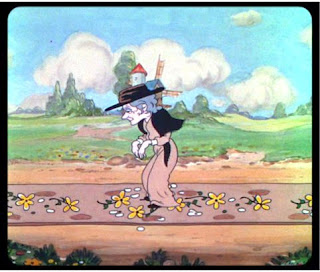 Helen Hayes was nominated for her role as a wrongly imprisoned woman who turns to prostitution in order to support her illegitimate son in The Sin of Madelon Claudet. 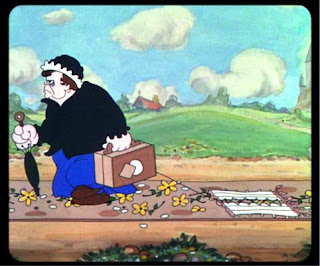 And Marie Dressler was nominated for her portrayal of a devoted housekeeper in Emma, who marries her employer only to have his three children turn on her when he dies..
The Best Actress statuette was awarded to Helen Hayes and for the first time in the Academy's history, a tie was declared for Best Actor - Beery received one less vote than March, but under the rules in effect at that time, a nominee had to poll at least two votes more than his nearest competitor to win. A tie was declared and the two actors were awarded statuettes. Both men had recently adopted little girls and in his acceptance speech March reportedly delivered one of the funniest lines of the evening, when he said, "Under the circumstances, it seems a little odd that we were both given awards for the best male performance of the year."

Parade of the Award Nominees was, by all accounts, a hit that evening. One newspaper reported the film garnered a "huge laugh."

Walt Disney knew prior to arriving at the banquet that he was going to receive two awards. Up until 1941 winners were informed beforehand, in order to allow members of the press attending the function time to meet their filing deadlines.

It's not known at this time if Disney gave an acceptance speech. The assembled crowd though agreed with the Academy's decision to award Disney the honorary statuette. One newspaper reported, "Judging by the applause, the greatest enthusiasm was for Walt Disney, creator of Mickey Mouse, and for Helen Hayes."

A press photograph taken at the banquet shows an obviously happy Walt Disney standing beside his obviously proud wife. In the photo Lillian holds the statuette, an Honorary Special Award given to her husband for the creation of Mickey Mouse, while Walt holds the Certificate of Honorable Mention, awarded to him for Flowers and Trees. 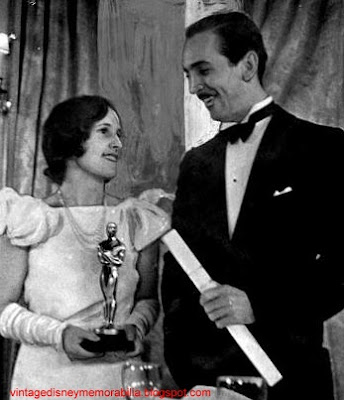 The photo appeared in several newspapers and magazines in the days following the banquet. The accompanying caption in one newspaper read:


"Mickey Mouse, the hero of the comic strip...and of the animated cartoons in the movies, has won for Walt Disney, his creator, the coveted distinction of a special award by the Motion Picture Academy of Arts and Sciences.

Mr. Disney is shown in the picture above, snapped at the annual banquet...where the award was made, together with Mrs. Disney, who is holding the inscribed...statuette symbolizing the award.

At the same time Mr. Disney was honored with one of the Academy's annual awards, this one for his color shorts. This is the first time that two awards in the same year have come to one man."


The ceremony marked just the third time the Academy had bestowed an honorary award and the first time an award had been given in the newly created Cartoon Short Subject category. 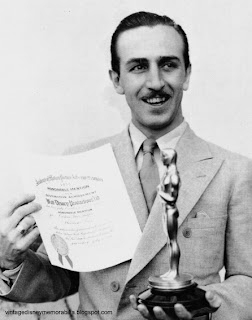 Walt shows off his two awards while on the grounds of the Hyperion Studio.

The Certificate of Honorable Mention stated:

"Academy of Motion Picture Arts and Sciences
1932
HONORABLE MENTION
FOR
DISTINCTIVE ACHIEVEMENT
Walt Disney Productions Ltd.
has been judged worthy of the Academy's
HONORABLE MENTION
for the Cartoon Short Subject

This judgment being rendered with reference to
Motion Pictures, First, Regularly Exhibited in
the Los Angeles district during the
year ending July 31, 1932."


Flowers and Trees was in production as a black and white short when the decision was made to scrap all of the completed footage. After witnessing Technicolor's newly developed three color process, Disney stated, "When I saw those three rich, true colors on one film, I wanted to shout." 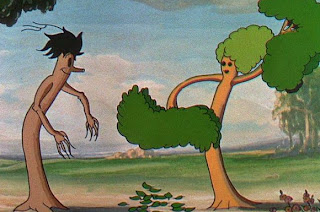 Ever the visionary Disney was able to convince Technicolor to grant him an exclusive multi-year contract for the right to use their new process. As soon as Studio technicians developed new adhesive color paints, production on the short resumed.

At the urging of a mutual friend, Disney showed some of the completed short, totaling no more than one minute, to Sid Grauman, owner of Grauman's Chinese Theater. Grauman was so impressed, he requested Disney finish the film as soon as possible so he could show it at his next major film premiere. Disney rushed the short through production in order to have the short finished in time to be shown at Grauman's world premiere of Strange Interlude, a feature starring Clark Gable and Norma Shearer.

The critical reviews praised Disney's venture into color: "Given its premiere at Grauman's Chinese Theater..the reception was such that the next ten [Silly Symphony films] will be on rainbow diversion. [The] critics rave over Flowers and Trees has been nationwide wherever it has been shown...the reviewers as well as the industry hailing it as a revolutionary step in the progress of cinematic development." In England Flowers and Trees "broke all short subject records by running for seven solid weeks in various West End theaters." 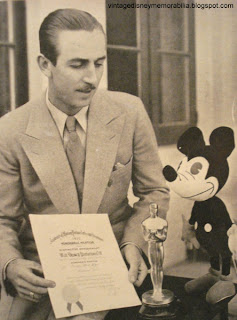 Taken at the same time as the previous photo, Walt Disney is pictured with his two awards and a Charlotte Clark Mickey Mouse doll.

At the banquet's conclusion, many of the attendees filed over to the Ambassador Hotel's Cocoanut Grove nightclub. While it's not known if Walt and Lillian joined in on the festivities, there can be no doubt the couple enjoyed their drive home that evening.

Walt Disney received many congratulatory telegrams and letters following the banquet. Perhaps the most touching came from former business partner Ub Iwerks, who had left the Disney Studios in February 1930. According to Iwerks' biography, "Ub's [telegram] was reportedly one of the few [Walt] truly cherished."

The two awards bestowed upon Walt Disney that night signaled the beginning of Disney's dominance of the cartoon genre. There would be many more awards to follow in the years to come.

My thanks to Jeff Pepper at 2719hyperion.com for providing me with the screen shots from Parade of the Award Nominees. Check out his site - he does great work. Thanks Jeff!

Thank you for this post! I love these glimpses into the Golden Age of Hollywood!

What a through look at early Hollywood and Walt.

The Academy Award cartoon is quite amazing. Who knew that Walt Disney had caricatured and cartooned Helen Hayes! Marvelous research.

Thanks for the positive feedback gentlemen...I appreciate your comments and your interest.